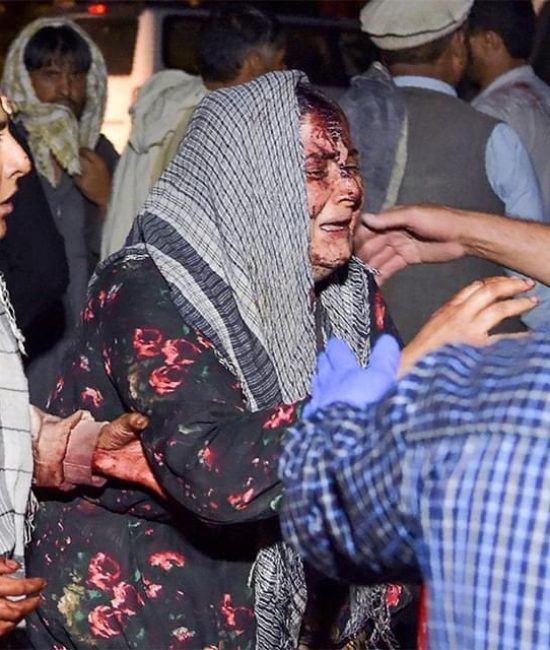 Two suicide bombs exploded Thursday, August 25th, at the entrance to the Kabul airport where evacuations of at-risk Afghans and US citizens have been on-going. The first blast struck the Abbey gate, one of the crowded entrances to the Kabul airport. The second exploded at the Baron Hotel, which was being used as a processing site for Afghans hoping to leave the country.

The death count is unconfirmed but at least 12 US troops have died and 15 were wounded in the blast. Some news outlets are reporting that over 60 Afghan civilians, including women and children, have been wounded or killed. Those numbers are expected to rise.

“People were hurled everywhere,” a witness of the explosions told the Guardian. “I saw at least 400-500 people there. … Half were hurled into the water and the others on the ground outside. We carried the wounded on stretchers and my clothes are completely bloodied.”

“I just saw a lot of people got hurt and people that were laying on the ground,” an Afghan interpreter told CBS News. “I saw a baby there and I went to her and I picked her up and started taking her to the hospital. … I took her to the hospital but she died on my hands. I did my best to help her.”

The suicide bombings were carried out by ISKP (Islamic State Khorasan Province), the Afghanistan arm of the Islamic State network. ISKP  is one of the most extreme militant jihadist groups and is currently at war with the Taliban.

Reports about the threat of an ISKP attack have been circulating since early this week. Wednesday evening the US embassy warned citizens to avoid the Kabul airport because of increased security threats. According to the Pentagon, both blasts at the Kabul airport were followed by gunfire from supposed ISKP members

The two suicide bombings come just five days before the August 31st deadline to evacuate all at-risk Afghans, US citizens, and troops. As of Wednesday, the Secretary of State estimated that there are 1,500 US citizens still in Afghanistan.

Pray for Afghanistan and donate to support Christians and other religious minorities who are facing an increase of persecution under the current crisis.